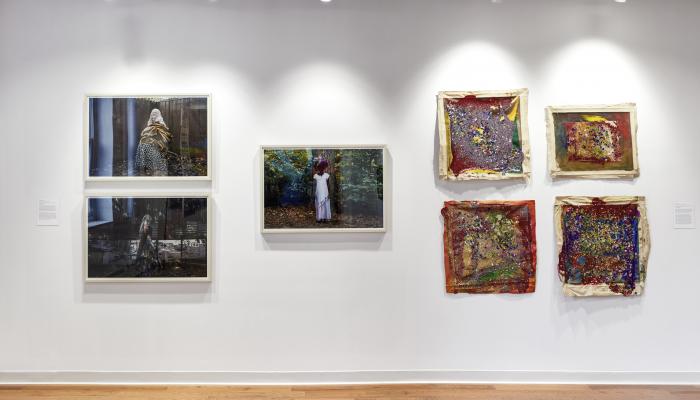 “In the past five decades, migration has defined Guyana. Liminal Space brings together sixteen Guyanese artists living in Guyana and the United States who explore the relationship between migration and the idea of the “liminal” — from the Latin limens, which means “threshold,” a place of transition, waiting, and unknowing. Working in a variety of mediums, they bear witness to what drives one from a homeland and simultaneously keeps one tethered to it”.

This is the first explanation that visitors will find at the LIMINAL SPACE exhibition, which will be open at the CCCADI (Caribbean Cultural Center African Diaspora Institute) in New York from June 17 to October 26. Sixteen artists will show their works, all with a solid reflective component, in an exhibition curated by Grace Aneiza Ali a well known cultural activist. She is the founder and editorial director of OF NOTE, one of the first online magazines focused on global artists using the arts as catalysts for activism and social change, and faculty member in the Department of Art and Public Policy at New York University.

Guyana’s legacy of migration reflects the broader emergence of Caribbean people in global metropolises and is symbolic of universal concerns weighing on our hearts and minds: the tensions between place and placelessness, nationality and belonging, immigrant and citizen. In this interview we talk with Grace Aneiza Ali about “Liminal Space” and her professional and personal experience, marked by her own story as immigrant from Guyana to the United States.

What would you highlight of “Liminal Space”?

There is no single story about migration in Liminal Space. Instead, what the artists illustrate is how nuanced and complicated the experience is. For example, Mason Richards’ film The Seawall (2015) examines the toll migration enacts on families; Karran Sahadeo’s self-portrait Untitled, (blue) (2014) investigates our reliance on technology to keep fragile bonds connected; and Keisha Scarville’s photographs in Mama’s Clothes (2015) allows us to examine what survives and what is mourned when a daughter loses her mother, her deepest connection to her homeland.

Migration, uprooting and nostalgia are anchor ideas in the story of the artists who are part of the exhibition. How are their personal experiences reflected in their art?

Individually, they draw from their personal narratives and their own migratory paths to reflect the nuances of migration — ranging from 82 to 30 years old, featured in the exhibition are artists who were born when Guyana was still under British rule. Witnessing it struggle through its transition to shirk a colonial past served as the impetus for their departure. Other artists have only known their homeland as an independent nation, and are remarkably proud of that independence, but yet made a difficult decision to leave. While others live outside Guyana’s borders and connect to Guyana only through their parents’ migration narratives. Some of the artists return to Guyana often, and some rarely. Some never. And yet, Guyana is at the core of their work.

You immigrated from your native Guyana to the United States at younge age. How did your personal story influence your approach to art and creation?

Absence is a great cataylst. Perhaps the most potent. Growing up in Guyana, I was rarely exposed to our country’s artists and writers. Our education, although robust,  was very much still a British-centered one. So, I fell in love with Louisa May Alcott’s Little Women before I encountered our own Guyanese writers Grace Nichols or Janice Lowe – and my discovery of them was because of my college Literature courses at the University of Maryland, an American university. I think of that irony – educated under a British system in Guyana where I never learned about our own people only to discover our legacy at an American institution. But even that was flawed, I also took Art History of the Americas courses and Guyana never came up in those courses. There’s a systematic erasure. I’ve always felt this absence deeply, felt robbed because of it, and so I’ve been on an ongoing journey to catch up and fill that void. The work that I do on Guyana’s artistic and cultural production comes from that place of great unknowing. There’s so much for me to do.

Is it easier to create from a comfort zone or from the uprooting of the immigrant?

I think both have their place. If by “comfort zone” we mean the opposite of “uprooting” – that is, artists that are in Guyana that choose to stay and work in Guyana, then I have to say that the work they are making is brilliant and innovative and provocative as those who have been uprooted and are mining uprootedness. Michael Lam, Khadija Benn, Karran Sahadeo and Dominique Hunter prove that.

Yours is a story of overcoming personal challenges. Do you feel that you could be  an inspiration for other citizens of Guyana who want to immigrate to the United States?

Perhaps that honor belongs more rightly to my mother. She’s overcome some daunting challenges that would break most people. I’m able to do what I do because my mother, an immigrant in the United States worked multiple minimum wage jobs to put her three children through college. We shine because of her. On my most exhausted day, I will never work as hard as my mother.

You have a profound knowledge of the art scene of Guyana. What would you emphasize about its current landscape?

Unfortunately, what the global public often sees of the visual culture of Guyana still centers on the exotic, tropical, colonial, and touristic. But these artists are part of a contemporary movement to counter this historic malpractice by challenging, disrupting, manipulating, and even exploiting the ‘picturing paradise’ motif often associated with the region. For that reason, fellow artists would benefit greatly by engaging with the artists in Guyana. Curators need to make their way to Guyana. Arts writers and critics need to be more invested in what’s going on on the ground there.

OF NOTE magazine is a well known digital media that you founded to highlight global artists using the arts as tools for social change. Have you achieved the goals you were looking for when it was created?

We’ve certainly carved out a niche place. Recently, we’ve been partnering with instituions like The City College of New York and New York University to adapt our curated issues bridging art and social justice into college courses. It’s been incredibly rewarding and a powerful education tool for students to have access to and learn from issues like The Imprisoned, which examines how artists are using their practices to confront mass incarceration in the United States.

Could you share any new project on the horizon after Liminal Space is finished?

I’ll be gearing up to teach “Contemporary Caribbean Art, Curatorial Practices and the Politics of Visibility” at Art and Public Policy at NYU. It’s the first of its kind for the Department. You can read more about it here.

Kwesi Abbensetts’ roots in Guyana stem from both city-life in Georgetown and country-life in the East Berbice-Corentyne coast — a stretch of miles with the Atlantic Ocean to its north, Suriname to its east, and Brazil to its south. From these crossroads, the bustling capital and the provincial countryside, Abbensetts became an early witness to constant acts of migration.

Damali Abrams is an American-born artist whose parents migrated from Guyana to New York City. Her mother’s stories of mermaids peaked her interest in the globally mythologized figure. In her artistic practice, rooted in collage, video installation, and performance, the mermaid gure features prominently as both subject and symbol.

Khadija Benn’s painterly portraits, lush with color, light, and a heavy- handed brush of glamour and romanticism, might appear as a replica of the ‘picturing paradise’ photographs that dominate Caribbean visual culture. However, it is very this aesthetic the artist exploits in her oeuvre by inserting the female body in Guyana’s landscapes via self-portraiture.

Since departing Guyana in 1973, Victor Davson has sought to negotiate the roots of the country’s cultural identities in his artistic oeuvre. Often, Davson calls on his childhood as the son of a postmaster whose stations throughout the country allowed him to bear witness to its multi-faith practices, including Hinduism, a dominant religion in Guyana.

Stanley Greaves’ artistic career has flourished in Guyana and throughout the Caribbean. After working in Barbados for almost two decades, Greaves migrated to the United States in 2008.

Carl Hazlewood created Demerara Song exclusively for Liminal Space, constructing the “wall work” on site as he contemplated the unique dynamics and characteristics of the space. As a Guyanese-American, his practice, he says, “Originates from the total sum of my experiences here, there, and elsewhere. Thus, my work can be Guyanese, American, and much more . . . all at the same time.”

Dominique Hunter moves in and out of several geographic spaces for artist residencies and opportunities, yet she is vocal about rooting her practice in Guyana, a country defined by the ebb and flow of departure: “There is an expectation once you have reached a certain age: pack what you can and leave. I am well past that age, yet I remain, stubbornly rooted in the land my parents spent their lives cultivating.”

Michael Lam’s ongoing Oniabo series transports the viewer to Guyana’s coastlines and shorelines. “The photographer, who is first trained as a biologist, is intentional in using “oniabo” to name the series, a word taken from the language of the Arawak people meaning “water.”

Andrew Lyght departed Guyana in 1969 for Canada and later moved to New York, where he’s currently based. The artist has mined acts of “constantly moving backward and forward between his childhood in Guyana and several cities on three different continents” in an artistic career spanning over 50 years.

Suchitra Mattai’s migratory paths through Guyana, Canada, and the United States inform her practice characterized by what she calls “disconnected landscapes that are unreal but but offer a lingering familiarity.”

In this deeply personal work, American-born artist Christie Neptune mines childhood memories of her mother, a Guyanese immigrant in New York, and her love of crocheting — a craft popular among Guyanese women.

At the age of seven, Mason Richards and his family departed Guyana for Brooklyn, a migration story the filmmaker mines in The Seawall. Filmed entirely on location in Georgetown with local citizens turned actors, the short lm illuminates a child’s struggle to reconcile the angst of leaving a homeland with the uncertainty of arrival in an unknown land.

Karran Sahadeo has lived outside Guyana’s borders for the majority of his life. His family left the country when he was four years old and he would spend the next 25 years between homeland and the Bahamas, United States, United Kingdom, and Canada. These acts of constant transition, of leaving and returning, inform his photography practice.

Keisha Scarville’s Mama’s Clothes pays homage to her Guyanese-born mother. The lush, organic landscapes of these images, shifting between Guyana and the United States, hold emotional and geographical significance for the artist. Of her mother’s dance between transient spaces, Scarville shares, “She maintained a connection to the land of her birth, firmly planting one foot under a tamarind tree in Buxton and the other, rooted on the rooftop of an apartment building in Flatbush.”

Guyanese-born painter Arlington Weithers migrated to the United States in 1969 and emerged among an esteemed group of Guyanese visual artists who have gained international reputation.