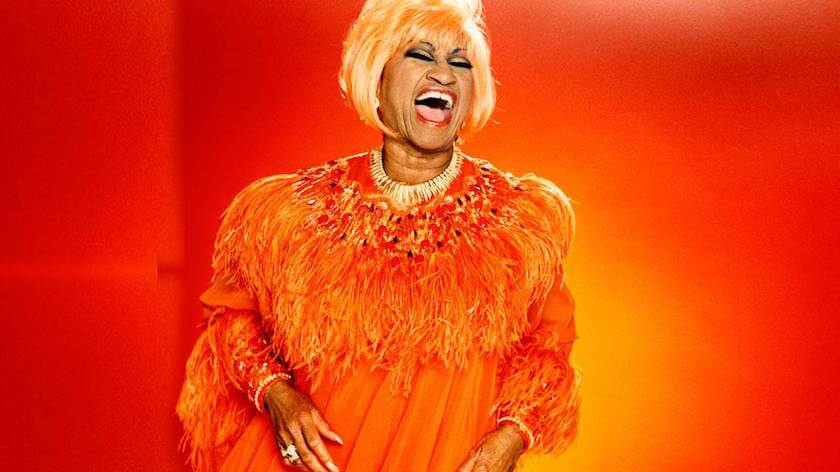 Celia Cruz was one of the most popular Cuban and Latin artists of the 20th century.
Travel and culture

Cuban music is all about rhythm and melody, its children carry the taste in their blood and they exteriorize it with the gift featured by sensitive people when it comes to spreading their feelings by means of sounds. Cuban women have specifically known how to inspire, feel, enjoy and shed light on the music of this hot land. Although only a few of them have been publically labeled “queens”, several women have actually shaken the realm of Cuban, Latin and international music.

From the self-assurance of La Lupe, Celia Cruz’s “azucar”, Celina Gonzalez’s tastiness, Olga Guillot’s elegance or the extraordinary timbre of Elena Burke, the history of Cuban music is made up of numerous stars that have used their heart and talent to immortalize it on the international sphere. The melody of these divas of Cuban and international music has prevailed in different genres, even in some rhythms where men have traditionally played the leading role, such as guaguancó.

Also known as the queen of Latin song, Lupe Victoria Yolí Raymond (Santiago de Cuba, December 23, 1936 — New York, February 28, 1992) was a hurricane in the history of international music. Some people used to say that she was egocentric, “she was crazy”, but the truth is that her voice was all she ever needed to express the passion she had inside, that’s the reason why her body was so restless while she was on stage, seducing the audience in Cuba, the United States and Puerto Rico.

Poor, evangelist, sick and forgotten when she was only 53 years old, that was the end of this artist, who was even more famous than Celia Cruz during the 1960 decade and she was the first Latin singer to perform at the Carnegie Hall and Madison Square Garden, in New York. Among other things, she was so successful due to her particular way of singing bolero, guaguancó, mozambique, mambo, bossa nova, copla, joropo, rancheras, rock… In each performance she was hurtful, sensual, scandalous, theatrical and eccentric. La Lupe was an erupting volcano.

One of her merits was related to the fact that she gave bolero a new turn when there was a boom of salsa. She did it by means of her unrivaled interpretative style in such famous songs as “Puro Teatro”, “Que te Pedi”, “Fever”, “La Mala de la Pelicula”, “Carcajada final”, “La tirana”, “No me quieras tanto”, “Adios” and “El amo”. La Lupe’s name is written in the Hall of Fame of International Latin Music, in New York. La Yiyiyi, as she was also called, was handed the Golden Disc of Popularity, by RCA Victor Company. Furthermore, she was awarded the title of “Sensation Artist” and “Golden Star”. In 2002, New York City baptized Bronx’s East 140 Street as “La Lupe Way”, to pay tribute to this singer.

“My English is not very good looking”, that was how a star of salsa genre, Marc Anthony, put an end to video “Valio la Pena”, a phrase he repeated to pay homage to the indisputable queen of this rhythm, matchless Celia Cruz. This artist, who dreamed about being a mother, housewife and teacher when she was just a girl, became the head of La Sonora Matancera in 1950. Years later, she immortalized a word with such a tone that any Latin American thinks in one person when hearing it, the unmistakable Azucar! (Sugar). The “guarachera of Cuba”, just as she was also known, was actually named Ursula Hilaria Celia de la Caridad Cruz Alfonso (Havana, October 21, 1925 – New Jersey, July 16, 2003) and she was born in Santo Suarez neighborhood, in Havana. In 1966, she took the US nationality and entered the salsa realm in 1973. Celia joined keyboardist and artist Larry Harlow, who was working with Fania record label, and she starred a concert of Afro-Cuban music at New York’s Carnegie Hall, a moment that was described as the beginning of success in the life of Celia Cruz.

The undeniable Queen of Cuban Salsa is not only one of the main pillars related to the immortalization of this genre, but she was also famous because the world cannot forget her emblematic wigs or the fashion style established by her inverted-heel shoes, as well as her colorful dresses. In terms of the movie industry, Celia achieved what just a few artists have: her songs have been included in over 30 movies related to Spanish American musical topics or Latin mafias.

On the 88th anniversary of her birth, Google used a “doodle” to recall the stamp of the emblematic Queen of Salsa, who won seven Grammy awards and one star at Hollywood’s Fame Promenade, in 1987. She also internationalized her songs “La Negra tiene Tumbao”, “Quimbara” and “La Vida es un Carnaval”. Celia Cruz became a legend on July 16, 2003, during a black week for Cuban salsa as it also lost the musical cadences of lamented Tito Duarte and Compay Segundo.

Celeste Mendoza decided to take her talent to the next level as she made incursions in an art field that was controlled by men. She wanted to be the queen of rumba, specifically guaguanco. That was Celeste Mendoza.

Celeste Mendoza Beltran (Santiago de Cuba, April 6, 1930 — Havana, November 16, 1998) was born in the popular Los Hoyos neighborhood, the genuine expression of popular culture from the easternmost region of Cuba. She was an impressive Cuban mulatto girl, with a mermaid-like body. That’s what we can see in pictures that date back from the 1950s, when she shined in the Cuban musical sphere. She was guaguancó embodied by a woman. Celeste Mendoza was the Queen of grace and guaguancó.

With a powerful contralto timbre, she was one of the greatest voices of tropical music. Such genres as mambo, bolero, guapachá, rumba and especially guaguancó, made her be an acclaimed figure in Cuba and overseas. This singer made history with her “Echame a mi la Culpa”, “Seguire sin Soñar”, “Papa Oggun” and “Que me castigue Dios”, by prestigious Mexican songwriter Jose Alfredo Jimenez. Celeste Mendoza shared stage with Benny More, Edith Piaf, Josephine Baker or Carmen Miranda, among other celebrities.

Just a few people have been able to put so much passion in music as Elena Burke did. It’s impossible to say no to the voice of the Queen of Feeling in Cuba, that’s why her second nickname was Mrs. Feeling. According to Orlando Quiroga, a prestigious journalist and scriptwriter of Cuban television, Elena (Havana 1928-2002) was the feeling voice that accompanied a whole generation throughout Havana nights. She is one of our finest female voices from all times, the queen of Cuban song. She was a member of Las Mulatas de Fuego band, along with Celia Cruz and Vilma Valle, and she was a founder of quartet Las D’ Aida, along with Moraima Secada, Haidee Portuondo and Omara Portuondo. Elena Burke was so acclaimed in the cultural sphere of Cuba that in nearly 60 years there was no club, cabaret, theater or TV show on the island nation without her songs. Although this magnificent artist’s repertoire was very rich, she especially remains in our mind because of her “Amame como soy”, musical theme of Cuban movie “Una Novia para David”, since it’s one of the icons of the national sonorous heritage.

Along with Omara, Moraima, Tania Castellanos, Cesar Portillo de la Luz, Jose Antonio Mendez, Ñico Rojas and a whole cohort of prestigious Cuban songwriters and singers from decades ago, she took Cuban music to the highest level during a glorious stage of the feeling movement, which was witnessed by Hamel Alley, in Havana.

People say that Olga Guillot was the “spirited” Queen of Cuban Bolero. Her musical notes were showy, with plenty of passion and feelings, a unique style that made her share stage with boldface names of the international stave, such as Frank Sinatra and Edith Piaf.

When describing Olga Guillot (Santiago de Cuba, October 9, 1922 — Miami, July 12, 2010), Agustin Lara, Flaco de Oro, said: “After heaven, Cuba. After Cuba, Olga Guillot”. On the other hand, Nat King Cole underlined that he had learned Spanish with this Cuban diva’s songs. Many people don’t know that she began her career by singing jazz, and her versions of famous songs became true international hits, such as “Tu me Acostumbraste”, which was taken as a gay anthem in the Havana nights of the 1940s.

Olga Guillot later decided to sing boleros in a moment when men were playing the leading role in that genre. Her style showed such a boundless and intense passion that she was internationally acclaimed and several streets around the world have been named after this singer. The convulsed world of album sales was shaken up by Guillot and she proved that women could succeed in the international sphere, thus paving the way to be followed by other Latin artists. The singer, who produced 50 albums and filmed 16 movies, is described as one of the most outstanding musical representatives of Cuba, just like Celia Cruz and La Lupe.

Olga Guillot was appointed “highest representative of Cuban bolero worldwide”, according to Don Francisco de Miranda Order, a prize given at Caracas’ Miraflores Palace. She was also recognized by New York’s Association of Show Reporters and prestigious associations of art critics around the globe. Besides the prizes and tributes received by this artist, in 2007 she was labeled a “legend of Latin music”, by the Latin Record Academy, producer of Latin Grammy Awards.

Nobody has ever captured the essence of Cuban countryside and musically reflected it with such intensity as Celina Gonzalez (Matanzas, March 16, 1928) did. She was called Queen of Punto Cubano, a nickname she was given during a tour around England, or Queen of Peasant Music; but the truth is that this Cuban artist gave the Caribbean island iconic songs, like “Que viva Chango”, “Santa Barbara” or “Yo soy el Punto Cubano”, which became elements of Cuban identity and worshiped pieces.

Celina traveled around the world and conquered numerous international stages, ranging from Colombia, Ecuador, Argentina, Mexico, Canary Islands, Spain, United States, England and African countries. She sang with remarkable figures like Beny More, Barbarito Diez, Celia Cruz, Nat King Cole and Pedro Vargas. Celina made incursions in the movie industry during the republican stage, let her tradition mark in TV shows like Palmas y Cañas, and she recorded tens of albums that presently make up Cuba’s musical heritage. In 2001 this singer was nominated for a Latin Grammy with her album entitled “50 Años como una Reina”, recorded along with her son Reutilio.

Celina was characterized by a clear, powerful and rhythmic voice. During the 1940 decade she met Reutilio Dominguez Terrero, a spectacular and talented guitarist, second voice, and they created the famous Celina and Reutilio duo in 1947.