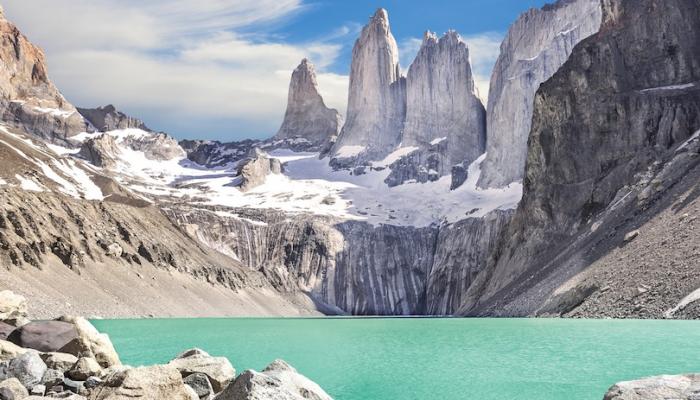 Squeezed between the Andes and the Pacific, Chile is sometimes called the longest country in the world. It is never more than 180 km (112 miles) wide, but its coastline extends over 4,300 km (2,672 miles). Among the top tourist attractions in Chile are the world’s driest desert, spectacular scenery of glaciers and fjords, and the many volcanoes along the Pacific “ring of fire”.

Cerro San Cristóbal is a hill in northern Santiago with a beautiful view over the city and, on a clear day, the Andes. At the peak, there is a church and a 22 meter (72 feet) statue of the Virgin Mary. The summit can be reached by cable car or a long hike. Cerro San Cristóbal houses the Parque Metropolitano, Santiago’s largest public park. In the park there is also a botanical garden, zoo and two swimming pools.

The largest penguin colonies in southern Chile, Los Pingüinos Natural Monument is home to more than 120,000 Magellanic penguins. Located on the small Magdalena Island, just one square kilometer and topped by a pretty red lighthouse, it lies 35km (22 miles) northeast of Punta Arenas. In September or October each year, the birds migrate back here and find their mate. By the end of March the penguins have returned to sea again.

The Chiloe archipelago is an isolated group of islands, best known for a number of unique churches that boast a particular architectural style called Chilota. This style is a very unique combination of aboriginal and European Jesuit influence, and was reflected in more than a hundred wooden churches in these islands that were created in the seventeenth century. The churches fell into disrepair, but almost two dozen restored sites are now available to tour, and serve as a gorgeous representation of this unique mestizo style combination.

Located on the Pacific coast of the central region of Chile, Valparaíso is known for its brightly colored houses, bohemian culture and beautiful seaside views. Built upon dozens of steep hillsides overlooking the Pacific Ocean, Valparaíso boasts a labyrinth of streets and cobblestone alleyways, embodying a rich architectural and cultural legacy.

Located within the Laguna San Rafael National Park, the San Rafael Glacier is a giant glacier that calves into the Laguna San Rafael. The glacier is accessible only by boat or plane. The journey by boat is a spectacle in itself, passing through the narrow channels of the isolated Aisén region. What you can see from the boat is in fact just the end of the glacier’s, which extends some 15km (9 miles) from its source.

Valle de la Luna is located in the Atacama Desert. This breathtaking desert landscape is the result of centuries of winds and floods on the sand and stone of the region. The large sand dunes and stone formations mimic the surface of the moon, giving the region its name, which translates to “Valley of the Moon”.

Pucón is a small touristy town in the middle of the southern Lake District. The unrivaled location by a beautiful lake and imposing volcano makes it one of the most popular tourist attractions in Chile. Pucón offers a variety of sports and recreational activities including water skiing, snow skiing, white water rafting and kayaking, horseback riding, natural hot springs and climbing the Villarrica volcano.

Lauca National Park is located in Chile’s far north, in the Andean range and is one of the top tourist attractions in Chile. The most spectacular feature in Lauca is the beautiful Lago Chungará, one of the world’s highest lakes. Looming over it is the impossibly perfect cone of Volcán Parinacota, a dormant volcano with a twin brother, Volcán Pomerape, just across the border with Bolivia.