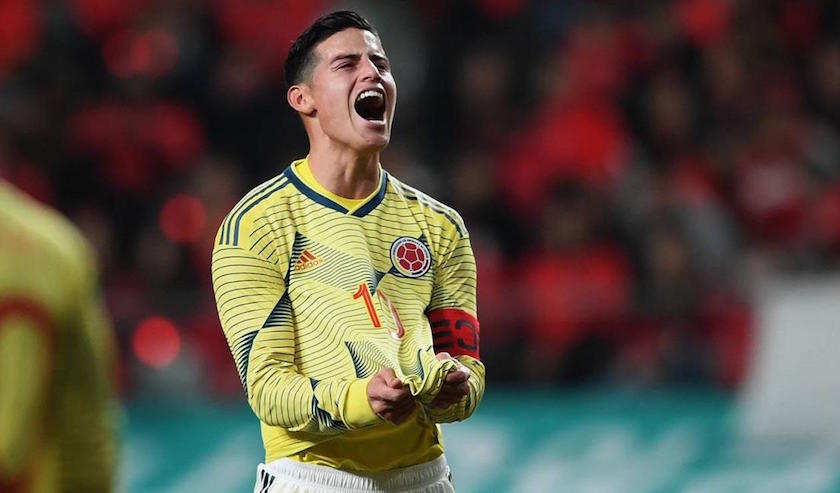 A full fledge international player ever since he debuted with the Colombian squad in 2011, James Rodriguez won the Golden Boot in the 2014 Brazil World Cup.
Sports

PanamericanWorld brings you a list of the 10 greatest Colombian soccer players throughout history. Naming only 10 among a plethora of great players is not an easy exercise, but here we dare to elaborate on this list.

The only caveat is that they need to have played for the Colombian soccer team, but the order in which they are mentioned does not necessarily imply a place of preference.

Carlos “El Pibe” Valderrama and his lush blonde curls are still icons of Colombia and its soccer. “Goldilocks”, El Pibe Valderrama played in more than 110 international matches. He was also the one to take up the leadership of the Colombian national team during three consecutive World Cups (1990-1994-1998).

His own intelligent, relaxed and elegant style was compared to Brazil’s “jogo bonito”. Valderrama is undeniably an important reference in terms of the identity and style of Colombian soccer.  Cesar Luis Menotti, Argentine technical director and winning coach of the 1978 World Cup with Argentina, said that El Pibe was a magician because he was able to pass the ball to his teammates practically without seeing them.

Although Falcao’s career has been erratic due to injuries, no one can take away the privileged place he unquestionably holds as one of the best players in Colombia. Falcao has scored more than 200 goals since arriving in Europe through Porto and has been considered one of the best scorers of the second decade of this century.

Dubbed “The Tiger” due to his combative spirit, he has been the undisputed star of the clubs where he has played: River Plate, Porto, Atlético Madrid, Monaco, Manchester United, and Chelsea. An injury in his first season at Monaco kept him away from achieving his best level, which he probably reached during his two seasons at Atlético de Madrid. Currently, at the twilight of his career, he plays for the Turkish Galatasaray.

Tino Asprilla was part of that great draft of Colombian soccer players that in the late 80’s and 90’s made Colombia dream of participating in the soccer world cup. His achievements are numerous: He received 5 titles with the Parma FC, participated in two World Cups and was chosen among the 5 best Colombian soccer players of all time. Lack of moderation and scandals diminished what was certainly to become a career with many more achievements. His biographies capture the comments of famous journalists: “Asprilla did not want to become the best player in the world”.

Considered one of the great stars of world soccer, James Rodríguez was Falcao’s teammate at the AS Monaco, with whom he also achieved success in Porto. Signed by Real Madrid after his extraordinary performance at the 2014 Brazil World Cup, he did not have the desired continuity and was transferred to Bayern Munich after playing three seasons at Real Madrid.

During his first season with the white team he lived up to the enormous expectations spawned after the World Cup, but then went into erratic cycles from which he was unable to come out. His irregular performance went on in Germany, with moments of both brilliance and exclusion. This season, Bayern has not exercised its option to buy the Colombian player and he has returned to the ranks and discipline of the Madrid team.

Willington Ortiz played on 49 occasions with the Colombian national team and scored 12 goals. Next to Carlos “El Pibe” Valderrama he is considered the highest-ranking player in Colombian soccer and was also named the best player of the twentieth century in Colombia. His style, dribble, agility, skill and speed were his hallmarks, which finally translated into goals. He experienced his biggest achievements with the Colombian professional soccer league, Copa Libertadores and the national team.

Fredy Rincon was an excellent offensive midfielder, with a wide-reaching attack, physical strength and technical skills. Considered one of the great Colombian soccer players throughout history, he crafted decisive plays with the Colombian national team, such as the tie he achieved against Germany for Colombia to go on to the quarterfinal round in the Italy 1990 Cup. He made it to the Real Madrid, scoring 4 goals in 19 games. A champion of the World Cup of Clubs with Corinthians, he participated with the Colombian national team in three World Cups.

Known as one of the best goalkeepers of all time in South America, his participation in the Italy 1990 Cup led to new rules to promote the figure of the goalkeeper capable of using his feet without touching the ball with his hands in case a teammate from the same team would make a pass. René Higuita, who performed risky and spectacular plays, is acknowledged as one of the architects that led Colombia to be recognized on the world stage.

Like Valderrama, Rincon and Tino Asprilla, he was part of the dream team that gained favor as top soccer figures. With 41 goals in official games, Higuita is ranked 4th with the most goals scored by a goalkeeper throughout history. He is also remembered for his famous Scorpion Kick with which he was able to stop goals in a highly unlikely manner.

Mario Yepes, captain of the Colombia team, 3rd player in history with more appearances and almost 100 games played representing the national jersey. He was always acknowledged for his excellent performance as a central defender.

It was in 1988 when Valenciano, aka “El Bombardero”, was part of the so-called “Best Colombian Soccer Team of All Time”. He began his career with the Junior of Barranquilla, becoming its top scorer with 158 goals. Throughout his career he scored 258 goals (217 in Colombia), keeping the record for a long time until beaten by Galván Rey.

His life has navigated through successes and excesses, as well as depression. He is currently fighting an addiction to sleeping pills. He played 29 games with the Colombian national team and scored 13 goals between 1991 and 2000. What is amazing is that Valenciano originally wanted to be a basketball player but came to soccer by chance.

He was a teammate of Higuita, Valderrama and Tino Asprilla in the golden age of national soccer. In addition to being one of the great players that traveled with the Colombian national team throughout 101 games and going through the Mexican, Spanish and American leagues, today he can also claim experience as Technical Director of the Colombian National Team and several other teams of the Colombian league. He was popular for his affable character, discipline and physical condition while playing professionally. Leonel Álvarez remains a top name in national soccer, and now he also boasts experience directing teams.

We cannot leave out others who, in the opinion of many fans, should be on the list of the 10 greatest players of all time of the Colombian National Soccer Team, namely: Arnoldo Iguarán, Miguel Calero (deceased), Oscar Córdoba, “El Pitufo” Antony de Ávila, Andrés Escobar, Ivan Ramiro Córdoba, and Juan Pablo Ángel, among others. Today the Colombian National Team has a promising future with new figures that are sparking a lot of interest in different leagues around the world. It is a developing story with many more twists to come. We welcome your comments. Are these the 10 greatest Colombian soccer players of all time?