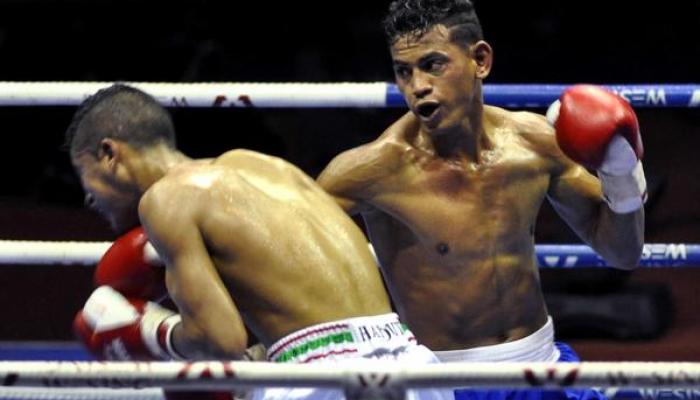 Baseball is Cuba’s national sport; nevertheless, boxing is the discipline with the highest number of titles in Olympic Games (34). Over the past 20 years, some of the most remarkable pugilists decided to continue their careers overseas, as professionals, and this fact brought about the decrease of results achieved by the national team in numerous events. However, the so-called “Cuban Boxing School” has kept on training great talents and, step by step, they have headed for victory over their opponents, with significant outcomes in the 4th World Series, in 2014.

Who are the 10 best Cuban boxers of the moment? PanamericanWorld proposes a list divided into two sections: amateur and professional pugilists.

THE RECOVERY OF CUBAN BOXING SCHOOL

In the fifth edition of the World Boxing Series, which is going to give positions for 2016 Rio de Janeiro Olympic Games, Cuban trainer Rolando Acebal – handpicked as the finest trainer in 2014 – is confident of victory due to the high technical level of his team, named “Domadores (Tamers)”.

“The boys are in great shape. We have done the most of our trainings in an effort to preserve the excellent physical conditions until June, when the Series is scheduled to take place. Afterward, we’ll have the Pan-American tournament in Toronto and the World Championship. We’re going to participate in a lot of tournaments this year and Cuban boxing will prove its worth.”

Looking forward to defending the title in the World Series and obtaining most of the positions for Rio de Janeiro Olympic Games, Acebal will especially count on five formidable pugilists:

This is a high-spirited fighter, very young, but with significant results. At the age of 19 he surprised everybody by winning a title in 2012 London Olympic Games. Before that, he had already climbed to the top of the podium in 2010 Baku Youth World competition and 2011 Guadalajara Pan-American Games. Discipline problems have been an obstacle in the development of Ramírez, as his presence in the national team has been unstable. However, in 2015 Robeisy seems to be more focused and Acebal placed him as the first man in the 56-kilogram division.

Ramírez told PanamericanWorld: “the boys are ready to face this edition of the World Series, with the aim of defending the champion title. I have prepared myself because this is an intense year. The Series is a long tournament and measures the level to compete in Toronto Pan-American Games and the world championship. Achieving this title is my personal goal.”

An implacable southpaw boxer. Twice world champion (2011 – 2013) and bronze medalist in 2012 London Olympic Games. His results in the 4th World Series were significant as he won six out of seven fights. Lázaro looks forward to improving his performance:

“Domadores are going to fight for the title and get most of the positions for the Olympics. Our boys are presently more-experienced pugilists, although some of them are going to make their debut in the tournament, but the base of the team is more solid and I strongly believe that we’re going to achieve our goals in this season. I’m in good physical condition, so you’ll have news from me”, Álvarez pointed out.

Another southpaw pugilist with polished technique. Olympic champion in 2012 London, bronze medalist in 2008 and world champion in 2009. Iglesias has had some discipline problems and he was not allowed to train with the national team in August 2013; nevertheless, he was later reinstated and participated in the 4th World Series, where he couldn’t be defeated in 5 combats.

“The team has trained hard. We have learned the five-round fighting system and the strategy to be followed in each match. I want to deliver more victories, compared to the previous series, defend my first-figure status and, of course, be the champion in my division guarantee my ticket to Rio Olympic Games”, Iglesias commented.

Perhaps his fighting style is not attractive (his guard is low most of the time) and he rather dodges the attacks, but that’s the way he has triumphed. Twice world champion in 2011 and 2013. He was assaulted with firearm in early 2014, but he recovered from that situation and gave Domadores five victories in the 4th World Series.

The nephew of great Félix Savón (triple Olympic champion), Erislandy, is a fighter that impresses everybody with his height, long reach and powerful punch that is feared by his opponents, most of which have been knocked out. He was unstoppable in the 4th World Series, as he won his eight fights and was recognized as the best boxer in the event.

“We had an intense calendar last year, through December 23. A new stage kicks off now and there are growing expectations. I have made improvements in terms of my punch, physical capability and adaptation to the five-round systems. I’m focused in obtaining positive results and getting the gold medals”, Erislandy told Panamerican World.

Several Cuban fighters made history in American rings over the first decades of the 20th century. The victories achieved by Eligio Sardiñas “Kid Chocolate” and his extrovert personality turned him into a sports idol. Furthermore, the prestige of Cuban boxing was also boosted by the strength of Gerardo González “Kid Gavilán”, Evelio Mustelier “Kid Tunero”, Eladio Valdés “Black Bill”, José Nápoles “Mantequilla’”, José Legrá y Benny “Kid” Paret (who tragically passed away due to the punches he received during a fight against Emile Griffith, in 1962).

In the early 21st century, several Cuban amateur boxers—most of which had won Olympic and world titles—decided to try professionalism. Some of them have been successful; others, wrongly advised and trained, have crashed against the rough and complex reality that prevails in professional boxing.

PanamericanWorld gives you details on the records set by the most outstanding five Cuban pugilists over the past lustrum. They have, at least, two common characteristics: they are all world champions and their experience on the ring is vast.

During his amateur time, Rigondeaux was recognized as the finest boxer on the planet. He has two Olympic titles: Sidney 2000 and Athens 2004; and two world crowns, in 2001 and 2005. His last performance as an amateur took place in 2007 Río de Janeiro Pan-American Games. Two years later, the “Chacal (Jackal)” as they call him, made his debut in the professional realm. His career has been up and down and some problems off the ring have stopped him from a better development; however, the Santiago-born boxer has been unbeaten in 15 fights and stand as the present champion in the 122-pound category with the World Boxing Organization (WBO) and World Boxing Association (WBA).

Since the junior stage, Yoan Pablo Hernández was described as one of the best talents in the country. He won several medals in the junior category and later decided to continue his career as a professional. He presently lives in Germany and has been victorious in 29 out of 30 fights, 14 of which were decided by KO. Yoan Pablo Hernández is the world champion in the cruise division of the International Boxing Federation (IBF), a title he has defended in four events.

As an amateur, Lara shined in Cuban national championships. He became a world champion in 2005 and Pan-American champion in Río de Janeiro. His disappearance there, accompanied by Rigondeaux, was very polemical. The Brazilian authorities sent both fighters back to Cuba. A year later, both boxers definitively abandoned the country. In July 2008, Lara began his career as a professional. The Guantanamo-born boxer has participated in 24 fights with 20 victories, 12 of which were decided by KO, two ties and only two defeats. He is the current super welter champion of the WBA.

The brother of Olympic champion Yan Barthelemy, Rancés has developed a successful career in professional boxing. He has 21 victories with 12 KO results. He stands as the world champion in the super featherweight division of the IBF.

He had not remarkable results as an amateur in Cuba; however, he has obtained important victories in the professional realm. Over the past two years, he has participated in two fights, but let’s just hope that the triumph against Edis Tatlis, in Finland, represents the definitive return of this pugilist to the rings, as he is the present champion in the 135-pound category of the World Boxing Association.