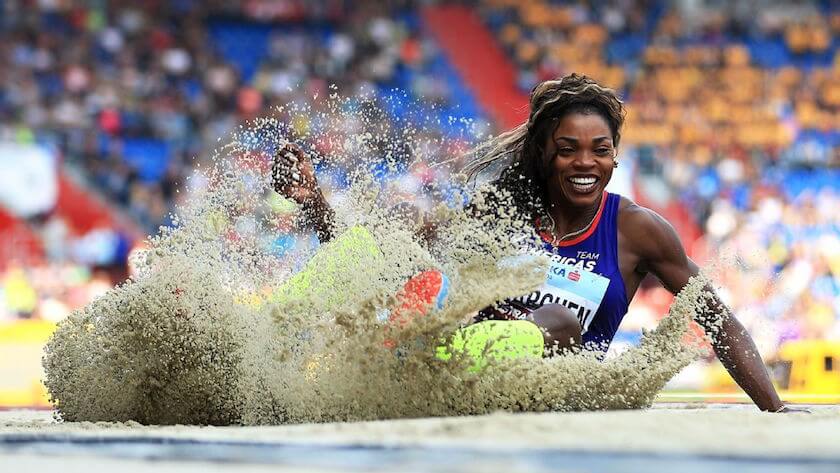 Caterine Ibargüen is, without a doubt, one of the best Colombian athletes of all time.
Sports

Colombia has made noticeable progress in the area of sports in the first two decades of the 21st century. If soccer players had the spotlight  before, now athletes from other disciplines such as cycling, athletics, baseball, boxing, weightlifting, and judo are making the headlines worldwide, which is why they have become country icons.

Selecting the 10 best Colombian athletes in history is not easy; but at PanamericanWorld we took up the challenge. Our list has representatives from different specialties, and we tried to bring you the past and the present. Were other athletes left out? Of course, however, we believe that those included had sufficient merit to enter the Top 10.

CATERINE IBARGÜEN, THE QUEEN OF THE TRIPLE JUMP

Caterine Ibargüen has been in the triple jump elite for almost a decade. Her record is impressive: a two-time world champion, with victories at the Moscow 2013 and Beijing 2015 competitions. In addition, in these tournaments she earned a silver medal, in London 2017, and two bronze, in Daegu 2011 and Doha 2019.

During the summer competitions,  Ibargüen also left her mark. In London 2012 she was runner-up and, four years later, in Rio de Janeiro, she climbed to the top of the podium, with a 15.17-meter jump.

Added to all this are two titles at the Pan-American Games and three at the Central American and Caribbean Games. Caterine is, without a doubt, one of the best Colombian athletes of all time. Will she be able to reach the podium at the Tokyo Games in the Summer of 2021?

Related article: The Top 10 Colombian Soccer Players of All Time

Edgar Renteria is the best Colombian baseball player in history. For 16 years, this Barranquilla native played in the Major Leagues, and is one of the few who can boast two World Series rings won with different teams. In the 1997 Fall Classic, defending the uniform of the then Florida Marlins, he fired the golden hit, in extra innings and in the seventh game, clobbering the Cleveland Indians out in the field.

Then, in the 2010 World Series, with the San Francisco Giants, Renteria was voted Most Valuable Player, hitting two home runs in that playoff against the Texas Rangers.

In total, Renteria participated in 2,152 games, hitting 2,327 hits, scoring 1,200 runs and had a batting average of 286. He won two Gold Gloves, three Silver Bats and was selected to the All-Star Game five times. Hall of Fame nominee in Cooperstown? Sure, why not?

YURI ALVEAR, UNBEATABLE ON THE TATAMIS

Yuri Alvear has been a great Colombia athlete in judo. Her record shows two Olympic medals, one bronze, in the summer event in London and one silver, in Rio de Janeiro, where she lost in the finals of the 70-kg division against the Japanese Haruka Tashimoto. In addition, she won the world title three times in 2009, 2013 and 2014 and took the bronze in three other versions.

Orlando Duque won the Cliff Diving world title 13 times and set two Guinness records. He triumphed in the most diverse scenarios and had the courage to jump from emblematic places, such as jumping out of a helicopter next to the Statue of Liberty. He also dived in Victoria Falls and in Antarctica.

Antonio Cervantes was born in San Basilio de Palenque and in 1972 became Colombia’s first world boxing champion. They called him “Kid Pambelé” and, in total, he won 52 fight by KO and sustained only 15 losses. For almost eight years he held the world title in the junior welterweight category version of the World Boxing Association, at 140 pounds. On the ring he was a legend and he never forgot his roots, although once he retired, the scandals and his addiction to drugs overshadowed his figure. In spite of it all, his triumphs in the ring made him one of the best athletes in Colombia.

Colombia has had formidable soccer players, from the great Carlos “El Pibe” Valderrama to Rene Higuita and James Rodriguez; But we decided to give a special place to Radamel “El Tigre” Falcao, because he has been the top scorer in the history of the Colombian National Team. At one point in his career he was considered among the best forwards in the world.

Falcao played for various clubs, such as River Plate, Porto, Atletico de Madrid, Monaco, Manchester United, Chelsea and Galatasaray.  During this long journey, he won eight titles, including the 2011-2012 Europa League, when he defended the colchoneros uniform. And with the national team, Falcao has scored 34 goals in 89 games.

MARIANA PAJÓN, THE  QUEEN OF BMX

Mariana Pajón is the only Colombian with two Olympic titles, so her place among the best athletes in Colombia is indisputable.  Atop her BMX, Pajón was crowned in London, in 2012, and did it again in Rio 2016. In addition, the “queen of BMX”, as they rightly call her, climbed to the top of the awards podium at the Pan-American Games in Toronto 2015 and Lima 2019. She also boasts 14 titles in different world championships.

Oscar Figueroa can be considered the best weightlifter in Colombia. He did not have an easy career because he was hit by injuries multiple times, but he managed to overcome those problems and became a legend.

He participated in four Olympic Games in a row, between 2004 and 2016. In London he won the silver medal, in the division of less than 62 kilograms, and his peak came four years later, when he won the title in Rio, in the same division , with a total of 318 kilograms. His image, on the floor and in tears, after reaching Olympic glory, is one of the most remembered in Colombian sports.

Figueroa also achieved three World Championship medals (one silver and two bronze) and was a two-time champion of the Pan-American Games, in 2011 and 2015.

Weightlifter Maria Isabel Urrutia has the honor of being the first athlete from Colombia to win an Olympic gold medal. At the Sydney 2000 competition, Urrutia won the title, in the 75-kilo division, by lifting 245 kilograms between snatch, clean and jerk.

She was also the first Colombian weightlifter to participate in a World Championship. In total, she participated in eight of these competitions, where she won two gold, four silver and two bronze medals.

Egan Bernal is the youngest of our selection of the best Colombian athletes of all time. He is only 23 years old, but his win in the 2019 Tour de France immediately elevated him to iconic status. Never before has a Latin American cyclist managed to win the most prestigious race in that sport. Bernal also holds  the title for the Tour of Switzerland and the Paris-Nice race, both in 2019.

Canadian Companies Rank in the Global Cleantech 100 list for 2021