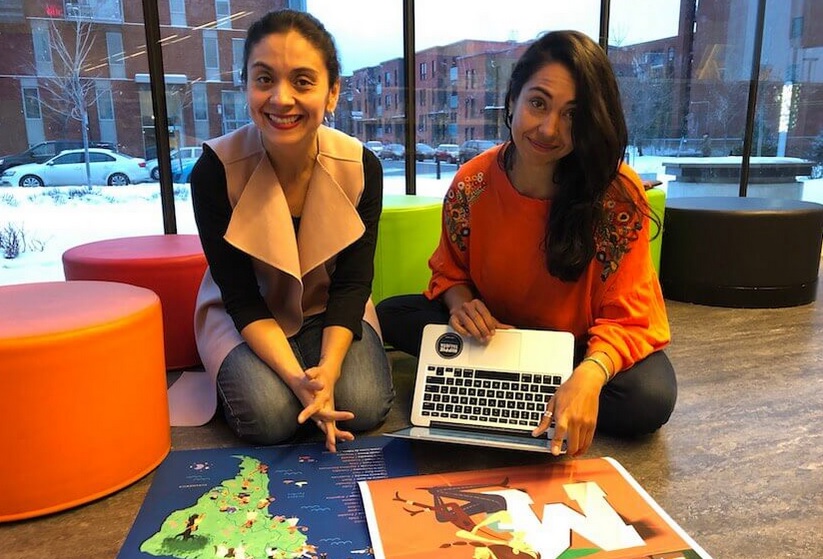 (19-06-2019) Andrea and Mabel González are sisters and co-founders of Nuestro Flow (Our Flow), a social projects platform that seeks to sensitize society about racism in Colombia.

They are not Afro-descendants. In fact, when they started this initiative in 2016 they had few references about examples of racism in Colombia or the experience of black communities, which in this coffee producing country amount to some 5 million people or 10% of the population.

It was their experiences as women, migrants and Latinas that made them reflect on the stereotypes that are built around nationality, culture and skin color; Colombian racism.

In 2007, after graduating from college, Andrea went to New York to study English. On several occasions marriage was proposed to her because of her nationality and “because we Colombians are seen as sexual objects who seek to get married to obtain American documents” she says.

Then she moved to Buenos Aires. In Argentina, her country was still linked to prostitution, drugs and Pablo Escobar. In 2013 she returned to Bogotá.

Related article: The story of the black president that Colombia erased from its history

Mabel, on the other hand, has never been discriminated against since she took up residence in Montreal. On the contrary, she stresses that in Canada there is a whole legislation on racial and gender equality.

Both, with opposite experiences and separated by thousands of kilometers, had the same motivation to build a space in which “the lessons learned” could be taught and those daily stereotypes could be madevisible and tackled in a country like Colombia where, unfortunately, these things commonly affect black people.

Black is in Vogue in Colombia

With a small budget, but convinced of the need for this type of environment, the Gonzalez sisters submitted their idea to several international calls for funds.

Both had a plus. Andrea is perfectly fluent in English and Mabel does the same in French. The first bid they won was for Social Business Creation, from the University of Montreal, from which they received face-to-face and virtual training to develop the idea.

With the multinational Cemex Mexico they triumphed in the Social Impact category and received another round of advisory services, plus an economic incentive for their business.

“Without these supports, the sustainable construction of this social model would have been difficult and delayed. I think that if we had had funding but not training, we would have failed”, reflects Andrea, who is the face of the project in Colombia.

After achieving the above, they launched El negro está de moda, a digital platform whose objective is to transform the negative concepts that are part of the everyday language of Latinos.

“We seek to modify the negative symbolism that exists around the word black as a call to reflect on racial discrimination in Colombia“, underlines Andrea, who holds degrees of architecture and social work.

Some expressions rooted in the collective consciousness, such as “I work like a black man to live like a white man” or “this slave job” and phrases such as blacklist, black market or black sheep, were given an opposite, positive image.

In this “black market” proposed by Mabel and Andrea, there are no weapons, drugs or illegal meds. Rather, it is an ecosystem of collaboration among Afro communities that grows to offer their products and services.

In other places they simply do not exist. “Blacks still struggle to get seats in Congress. It is an environment where these communities suffer from lack of opportunities, especially in areas such as higher education, entrepreneurship, science and technology”.

The Blacklist of Entrepreneurship

However, at this stage, they agreed that it was not enough to make a couple of phrases fashionable because they realized that the country’s black populations continue to be pigeonholed in the music, song and sport fields.

With this diagnosis, in addition to the added leverage from SocialLab and the training received at the University of Montreal, El Negro esta de Moda was launched, in June 2017, a pilot model of their black list: an entrepreneurship contest for women of African descent.

Andrea González recalls: “We invited Afro women from all over the country to register their endeavors and businesses. We chose 5 winners who received business training with several specialists so they could structure their businesses and stay afloat”.

Drinks from the Chocó region, two clothing lines, a doll factory and a model for web sales were boosted.

Currently, the 5 lucky chosen continue to grow their business models. Three of them are already in Bogotá and are success stories that will be part of the second call for The Blacklist in the upcoming months.

Related article: The black musicians who have put Colombia on the map

The Black Sheep, a Heroine for Minorities in Colombia

Candelaria is the image with which Nuestro Flow decided to introduce its message in other spaces, such as schools, universities and public and private institutions.

It is about a girl from Quibdó who was forced to move to Bogota. She bolstered herself with a yellow mask and cape, which symbolize her black roots and her good disposition toward life and audience reception, without gender or color discrimination.

In social media, her messages are thought-provoking to encourage reflection and empathy, not only towards Afro-descendant populations, but also towards other ethnic minorities, the earth and the environment.

He remembers the lessons of black leaders like Audre Lorde, Barack Obama, Marian Edelman and Mary Grueso. They defend social causes and fight for the rights of children.

In this context, Andrea says that Candelaria has been a tool to prevent bullying in schools in Bogotá and other regions, such as Pasto, Tumaco and Cali. “She has been a valuable tool for teachers, who have included her messages  in their educational pages.”

With Uramberas, Nazly Blandón’s doll brand, one of the winning entrepreneurs of the blacklist, they created the real version of Candelaria. The doll is already on the shelves of hundreds of homes and schools.

In addition, last month, Candelaria was the image of the institutional campaign to combat discrimination within the Victims Unit in Colombia. Her image has been fundamental for Nuestro Flow to give workshops on equality and cultural diversity throughout Colombia.

Currently, with the help of ACDIVOCA Colombia, the entrepreneurs propose to present a digital animated series with Candelaria and 4 other characters that represent the other minorities that live in Colombia: raizales, native people, palenqueros and gypsies.

The success of Candelaria has led its creators to open another path. “We are in the process of raising awareness and mindfulness about discrimination and racism at the organizational level. We want to send a message to companies about the value of diversity to enrich their businesses”, added González.

They agree that it is essential to promote new narratives to build a more just and equitable society. They recognize that it is an unexplored terrain, but they hope to “plant great ideas to continue breaking discriminatory stereotypes.”